Excerpt from A Farm Wife’s Journal

When I was 27, I married a dairy farmer and moved to northern Vermont. Dan leased a farm there, and we lived up back of the barn in a trailer.

The winters in Greensboro are cold and snowy, but I was young enough to be tickled at the sight of a “frostline” about two feet high along the inside of the hall in the trailer. By January, though, I was ready for a break from winter. 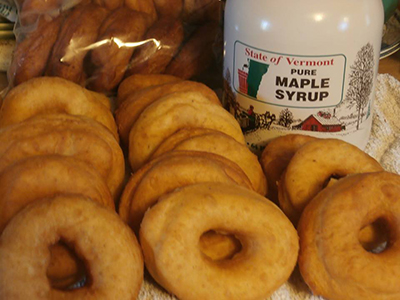 The annual Farm Show in Barre provides that break for many folks in Vermont, and I was no exception. Early in January, I began urging my new husband to pick out a bale of his nicest hay, and coaxing him to enter a jar of haylege. I began to go through the recipes and make preparations to enter the home products division. I come from a family with a good-sized sugarbush, and I wanted to try a maple class.

The Agriview came in the mail with listings of classes, and there it was: “Maple Specialty”. I tried to think of something different, and came up with my Maple Popcorn Balls. We were pretty isolated in Greensboro, so I found time between chores to practice my specialties that week before the Farm Show. My popcorn balls were tasty, but did not stick together at all. I renamed them Sugared Popcorn, and we enjoyed it after supper.

Next, I made up a batch of Maple Maltex Bread, and left it rising while I did part of the milking. When I ran up from the barn to check it, the dough had flowed over the bowl onto the top of the wood stove. The finished product was very good, but I decided bread was too time-consuming for a day that would be hurried.

The entries were due at the show on Monday, so I planned to spend Sunday cooking. But rare company drove up right after morning chores, and that was the end of my Sunday cooking. By the time I was done chores and supper, I was asleep on the couch. I set my alarm for four o’clock Monday morning, and figured to get a good start by milking time.

I had dreamed up a recipe called Vermont Maple Cheesecake. I needed hard maple sugar to grate for a topping, so first thing after getting the fire going, I set a pan of syrup to boil on the stove. Then I prepared the cheesecake and got it into the oven. Such elaborate fussing I did to get my graham cracker crust edges even! I doubled all the ingredients so as to have one cheesecake left at home to sample. The edges of this one were ragged, and clearly done in a hurry. As I rushed to find some index cards to supply my recipes on, over my pan of syrup boiled. I mopped burning syrup off the stovetop, and I could just hear my dad advising, “Don’t turn your back on boiling syrup!”

I raced against the clock, now peeling potatoes for my Potato Doughnut recipe. So much rushing between the house and barn, to stir the cooling maple sugar, feed the bawling calves, grab the cheesecakes from the oven, grain the cows, heat the lard for frying, hay the heifers.

Amanda, a fresh cow, was still off-feed even after our treatments of dextrose and glycol, so I called the vet. Dan had a dentist appointment, and off he went after breakfast, leaving me to a quiet morning of cooking, doing after breakfast chores, and talking with the vet. Our trailer was out of sight of the barn, and it was a constant inconvenience to guess whether the dog’s barking meant the arrival of the vet, a salesman, or just a passing car. I sure didn’t want to miss the vet, so at each barking spell I hauled my boots on and ran down to the barn.

Poor Amanda was gaunt and bony after three days of only picking at her hay. Her hair was dull and her eyes depressed. The vet dosed her up, and as he was giving her a bottle, we discussed ways of tempting her to eat. Molasses? Beet pulp? Coarse hay, apples, potatoes?

Had I ever tried transplanting a cud? His advice was to sidle up to another cow, quietly insert my hand into her mouth, take her cud, and plant it far back in Amanda’s mouth. That well-chewed cud would be teeming with bacteria, and stimulate Amanda’s rumen to work.

I finished chores and hesitated, considering wanting to help Amanda against the flying clock. It was nearing noon, and my cheesecake was chilling. I had selected six regular-looking doughnuts and had given up on the casserole class for lack of a disposable pan for my entry.

I eyed Polly, a quiet, older cow with a placid disposition. A likely suspect for a cud donation. The vet had warned me that any disturbance would prompt a cow to swallow, thwarting me.

No time to be thwarted! I edged slowly along, humming. Beside Polly, I slid my arm along her nose, and poked my hand between her jaws. Success! A good-sized, smelly wet chaw. Would Amanda swallow it, or manage to spit it out? I used the same technique, slipping it into her mouth, holding her jaws together, and stroking her long throat. Success! I felt the mass go down.

As I hurried from the barn, once more up the hill to the house, an idea finally came to me for a casserole entry. Here was the main dish, featuring Vermont cheese, that would require no real container. Pizza! And just time to prepare it, leaving enough for Dan’s dinner.

I cut a cardboard circle, then formed a “pan” of aluminum foil on it. In no time my pizzas were baking, the cheese melting deliciously. I was in a state of high, tense spirits, awaiting Dan’s arrival home with the truck so I could get to Barre with my entries before the deadline, and back again for milking.

I flew around our tiny kitchen desperately trying to fit everything into a cardboard box to balance for the trip. I had to bite my tongue to keep from snapping as Dan carelessly spun my little pizza on one hand, trying to help me load up.

What a relief to march up the Barre auditorium steps, and deposit my entries on the front table. People bustled in and out, with armloads of potatoes, apples, hay, and maple syrup. Angel food cakes and high loaves of homemade bread were carried in with careful pride. What a wonderful taste of harvest time, right in the depth of winter!

On Tuesday Dan and I went off to see the Farm Show together, attend the Maple Sugarmaker’s banquet, and visit with friends and relatives. I was so pleased to find “Excellent” stamped on my doughnut and pizza entry cards, and left determined to try once again in the maple specialty class the next year. The judges had noted that my cheesecake was not strong enough of maple flavor.

Amanda was chewing her (or was it Polly’s?) cud when we got home.