In 2014, a new sugarhouse was designed and built, set facing the south, with a narrow northern roof, and a large southern exposure to accommodate seventy solar panels. On a bright, sunny day in January, the numbers were climbing, showing the overall amount generated. On even a cold day, the system can output just over 15,000 watts. Averaging throughout the year, this energy supplies the sugarhouse needs, and about half of the power used on the family dairy farm, just down the road. Paul Lambert, partner and manager at Silloway Maple, designed and built the sugarhouse, with John Mattern, of Integrity Energy, from East Bethel, Vermont. John and his business partner, Amos Post, designed and installed the solar system.

The new sugarhouse has a second story, where the sap is stored prior to boiling, and visitors can stand above the arch for a spectacular view of the boiling process. Schoolchildren spread out blankets, and enjoy sugar on snow, and old fashioned raised doughnuts with syrup. A film telling the story of sugaring fills visitors in on the history of maple sugaring, and the process involved.

The Silloway/Lamberts fire the arch with waste wood from their logging operation. In recent years, Paul has branched out his stacking of wood to include several German Holzhaufens, large beehive shaped piles. The purchase of a reverse osmosis machine saves about 80% of the wood and labor required for boiling. This means a change from about sixty gallons of sap boiled to produce a gallon of syrup, to about eight. The raw sap passes through a membrane in the reverse osmosis machine, which removes much of the water. The new evaporator uses gasification, and has a series of preheater pipes inside of the steam pipe. 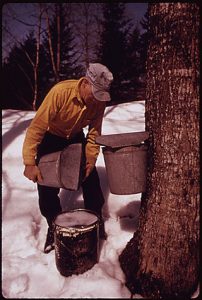 For many years, woods roads were “broken out” in the early spring. The bulldozer was driven through the deep snow, making roads through the sugarwoods. Traditionally, during school vacation, the third week of February, the trees were tapped. First went the person tapping the tree, carefully choosing a spot to drill that was not too near the taphole from another year. Next, treading in the same footsteps, walked a brother with the apron of spouts and the hammer, carefully tapping each metal spout in, followed by someone with a long roll of buckets, and lastly, the person with the covers.

As a young girl, I remember this as a time of great excitement, working together, and watching eagerly to see those first drips of sap. Our operation was all on buckets at that time, requiring the entire family, and some hired help, to gather sap during each run. The buckets of sap were poured into five-gallon pails, carried to the gathering tank, on a sled or trailer drawn by the ‘dozer or a tractor, and poured in through a strainer. What a wonderful sound the “ping, ping!” of sap dripping into the many empty buckets made. When the tank was full, the gathering crew rested on the ride back to the sugarhouse. Sudden ups and downs, tipping precariously, and getting stuck made each run an adventure. Sap has to be gathered even during those cold, wet snowstorms in the early spring, and then we all wore rainsuits, complete with wide-brimmed rainhats. Later in the season, the warmer spring days found us working in our shortsleeves. Louise always packed a big box of sandwiches, apples, and cookies to be eaten in the sugarhouse while the sap ran into a storage tank. We often roasted hotdogs and marshmallows on sticks over the big fire in the arch. Many nights we dreamed of buckets running over, and our fingers curled around the bails of our gathering pails. 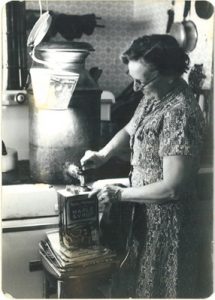 In the 1970’s, we changed our bucket system to tubing, originally on gravity, and currently on vacuum. Tubing is run to each tree, and then to a large storage tank. We walk the lines frequently, checking for damage, caused by squirrels, woodpeckers, falling limbs, and the alternate freezing and thawing. The sap is filtered, and run through a reverse osmosis machine.  Many nights, the men are out late, and up early, maintaining the “RO”.  The sap is passed over membranes which remove part of the water, condensing it to reduce boiling time and saving cords of firewood.

Our boiling is still done on a wood-fired arch. Many, many cords of wood are cut, split, and stacked each year. The wood is a by-product of the logging and firewood operation on the farm. The arch is fired about every four minutes during boiling, keeping someone busy carrying the wood in from the woodshed. 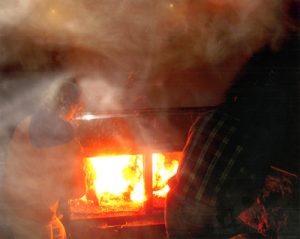 “It’s not a job for a nervous man,” Paul Silloway always said of the boiling. It takes hours of careful watching, testing the syrup for proper density, drawing off, and filtering, to condense the sap into syrup that is ready to be canned. It takes an average of forty to fifty gallons of sap to produce one gallon of maple syrup. Clouds of steam rise from the open flaps on the sugarhouse roof. Sparks flying up from the smokestack at night are an awesome sight. Little ones sometimes swing in the woodshed, and sometimes sleep under a pile of coats. Many meals are savored in the sugarhouse, and homemade raised doughnuts with hot syrup are the treat we all look forward to.

Family members have come and gone, with the sugaring operation always providing opportunity for hard work and good times together. Paul and Louise always worked in the maple sugar industry. Sons David and Stuart, and daughter Bette joined them. Currently Paul Lambert manages the sugarwoods, tapping and overall production management. Bette oversees marketing, agritourism, and orders. Marilyn Lambert manages the Creamee business, does a lot of boiling, and pitches in wherever needed. We often wear many hats, as there is a wide variety of work involved. 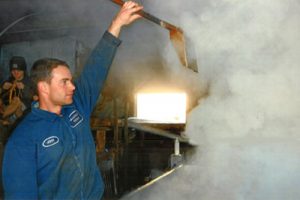 Paul was very active in the Orange County and Vermont state organizations over many years. He was named Sugarmaker of the Year, and his grandson David Lambert was the 2012/2013 Maple Ambassador. We all enjoy working in the sugarhouse at the Tunbridge World’s Fair, making different products to promote maple. Our syrup and cream have won many awards for quality. We are looking forward to building a new sugarhouse in 2013, and continuing to produce some of the world’s finest maple syrup. Sugaring is “in the blood”, causing those who love it to work the long hours and thrill to the call, “Sap’s running!” 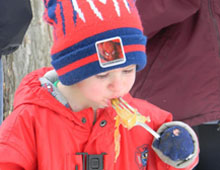