The History of Maple Sugaring

“In 1755, a young colonist was captured and ‘adopted’ by a small group of natives in the region that is now Ohio. In 1799 he published his story in An Account of the Remarkable Occurrences in the Life and Travels of Col. James Smith, which includes a description of how the Native Americans made maple sugar: ‘Shortly after we came to this place the squaws began to make sugar. We had no large kettles with us this year, and they made the frost, in some measure, supply the place of fire, in making sugar. Their large bark vessels, for holding the stock-water, they made broad and shallow; and as the weather is very cold here, it frequently freezes at night in sugar time; and the ice they break and cast out of the vessels. I asked them if they were not throwing away the sugar? they said no; it was water they were casting away, sugar did not freeze, and there was scarcely any in that ice. They said I might try the experiment, and boil some of it, and see what I would get. I never did try it; but I observed that after several times freezing, the water that remained in the vessel, changed its colour and became brown and very sweet.’” library.uvm.edu/maple/history 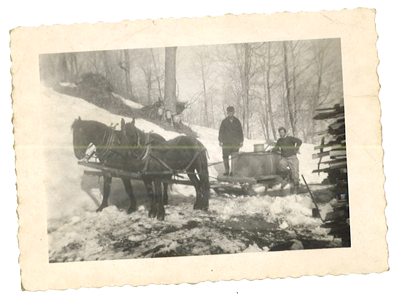 There are many stories about North American Indians discovering maple syrup; one of the most well-known says that one day a squaw was making stew, and her chief threw his tomahawk into the maple tree where she was cooking. The sap dripped into her cooking vessel, and yielded a delicious, sweet flavor.

The early settlers boiled their syrup down into hard maple sugar. Most families made enough for their family’s needs, ending dependence on imported cane sugar. Sugaring added income as more was produced and sold.The maple sugar was put into large pails, commonly weighing thirty-three pounds. Later on, the sugar was sometimes put into decorative molds, turning out maple leaves, men, and women.

“That was 1915. She (the neighbor) had the old fashioned wooden buckets – some were cedar and some were spruce. The spruce buckets were all painted maroon red. There were wooden spouts five inches long…To make a long story short, the sugar house had fallen in and we boiled outside. The first day of April in Northern Vermont we were all done sugaring. We go three and three-quarters pounds of hard sugar for every bucket hung, all from three big runs. We boiled all day and never sugared off ‘til night. We took that hot syrup in five gallon gathering pails on a sap yoke and lugged it to the house, fifty rods away, ‘til they had a slack time to finish it up.” Orin Carpenter, Randolph Center, Vermont “Maple Sugar Trees and Red Oldsmobiles” by Bette Silloway and Jessica Wright 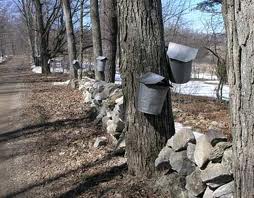 Over the years, metal buckets, spouts, and covers were used, with the gathering process changing from carrying the sap in buckets hung from yokes over their shoulders, to tanks on horse or oxen drawn sleds, to bulldozers and tractors. Some still sugar the old-fashioned way, but most syrup is now produced from sap that runs through tubing directly to the sugarhouse or storage tanks. The evaporation process continues to see advances, with reverse osmosis machines removing some of the water before the sap is boiled.

Much research has been conducted, and still is, to find the healthiest, most efficient ways to produce maple syrup. Maple producers now use a smaller spout, which allows the tap holes to heal over more quickly, and drill fewer taps per tree.

Sugaring is “in the blood,” causing those who love it to work the long hours and thrill to the call, “Sap’s running!” 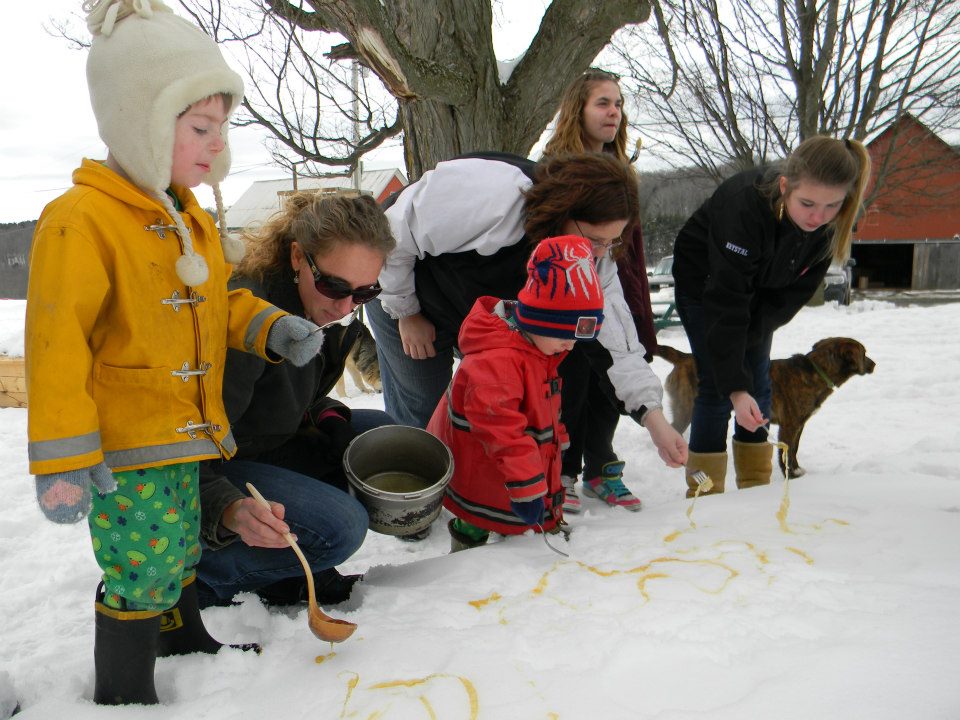